The HumViewer is a program that can be used to view sonar recordings created on a Humminbird sonar (Side-imaging or Quadrabeam).
Versions available for both Windows and MAC
The current version is 86 (Release date 10-04-13 08:00)

The main features of the program is: 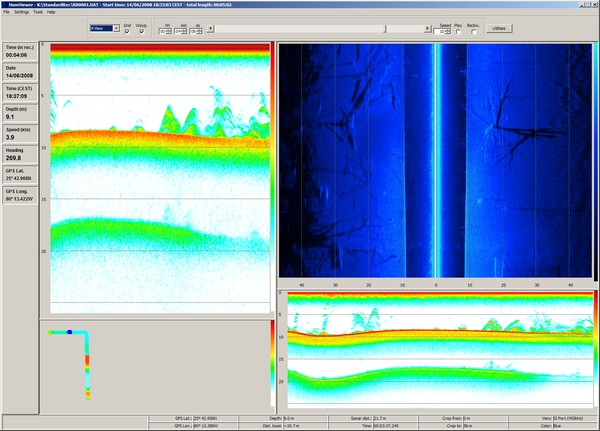 To install the program, just run the HumViewer setup file and follow the steps.
A program group and a desktop icon will be created for you.

To install the program, download the HumViewer for MAC application package and save it on your computer.

If you want to try the program but don't have any recordings, you can download one here. It is a self-extracting zip file containing a short example recording.

NMEA out on socket

It is possible to configure HumViewer to send out NMEA messages on a TCP/IP connection (Choose 'Settings'->'NMEA setting' in HumViewer). The TCP/IP connection can be connected to a virtual TCP/IP-to-serial bridge and thereby feed into a NMEA enabled application (e.g. DrDepth).
Make sure the TCP/IP-to-serial bridge is operating as server (on TCP/IP side), and use same port as configured in HumViewer.
Note that firewall setting can prevent HumViewer in connecting.

The following program can be used to create the TCP/IP-to-serial bridge (I installed it as standalone):
HW VSP
Free Virtual Serial Port to connect any TCP/IP Terminal server to your Windows as a virtual serial port (e.g. COM 7). Produced by www.HW-group.com.

Please report any issues, comments or requests here.
That will also be the place that new releases will be announced (and here of cause).